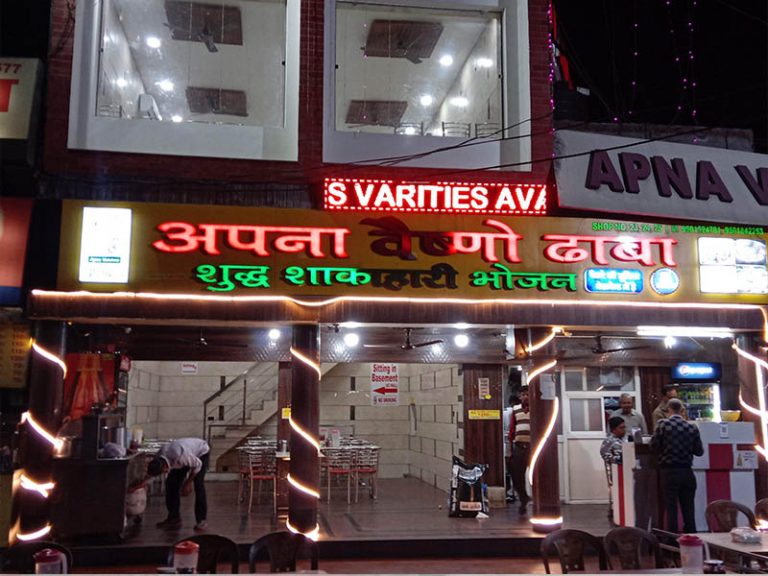 But ever since Apna Vaishno Dhaba set up shop for more than 25 years, Apna Vaishno Dhaba were clear that the concept of Taste was paramount for us,” we always focus that something special would be prepared and extra attention given to make customers comfortable. And this is what makes the dhaba so popular among locals and travelers as well. Pointing towards well-off landlords, industrialists and daily wagers eating in the air-conditioned hall, people says It’s the word-of-mouth publicity. But more than that, it is our hospitality that brings people to this place and get a proper meal with hospitality. The butter and unlimited lassi come without extra cost with meals and give a proper satisfaction.

Apna Vaishno Dhaba cooks are always ready to serve everybody-from top corporate executives travelling on this road to local villagers who come for a meal anytime of the day here we have the combination of our paranthas, white butter, green chutney and lassi is well-known and recognized as a Best Restaurant in Panchkula. If you are a paneer fan, the Apna Vaishno Dhaba, with piping hot rotis straight from the tandoor make for a great lunch in Best Restaurant In Panchkula.

Despite the onslaught of multinational food chains, Apna Vaishno Dhaba popularity has been far from dented.Several chefs from well-known restaurants including those in five-star hotels come to us for meals and people have always told others that the food and presentation is great with a very pocket friendly price. For, Apna Vaishno Dhaba, it is the word-of-mouth that matters most and need to recognise as a Best Restaurant In Panchkula.

When Panchkula was still finding its feet as a planned city, Apna Vaishno Dhaba, which started its operations with one booth and now has four, has been serving some of the best known Punjabi vegetarian delicacies in town. This dhaba was the favourite eating joint of many Actors, politicians and sports man, who regularly visited it to savour the dal and paranthas. Apna Vaishno Dhaba has retained both the recipes and cooking style that was followed ever since it was established. It is ver important to work upon taste aspect when serving for a Restaurant. You cannot skip this aspect and Apna Vaishno Dhaba have a passion in mind to become Best Restaurant In Panchkula.

Things have not changed ever since the place came into being established that is 1994. The establishment might have increased the number of shops to four across Panchkula but there has been no change in the quality we offer. There are so many verities has also been offered by Apna Vaishno Dhaba to give so many options to client and give best food to the public so that everyone gets Apna Vaishno Dhaba result on search of Restaurant in Panchkula. Lamenting that the demand for sweets and snacks has been going down consistently, especially among youngsters. It is very important to maintain a proper goodwill in the market as Apna Vaishno Dhaba is the Best Restaurant In Panchkula.